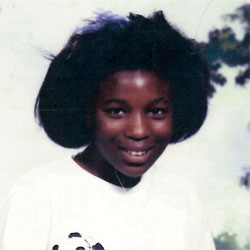 VERONICA ANN TAYLOR, 13, was last seen leaving a relative’s residence at the Phoenix Apartments in Lubbock, Texas the evening of 03/25/87. Her body was found the following morning several miles away.1

At the time of her death she was a 6th grade student at Murfee Elementary (now closed), and listed at Phoenix Apartments.

Lorene Taylor, her aunt, says “We never stop thinking about her. We know one day justice will be served.”2

Veronica is interred at the City of Lubbock Cemetery.3

According to Sheriff Sonny Keesee, Veronica’s body was discovered 03/26/87, just before 7am, in a field adjacent to FM 1729 in east Lubbock. Her panties were tied around her neck, and she’d been severely beaten, her face almost unidentifiable. Evidence collected at the scene included a comb and school supplies in her pockets.4

An autopsy later determined cause of death was blunt force trauma (single blow to the back left the head by unknown instrument), and confirmed Veronica suffered sexual assault and been strangled.

Jim Hansen, a Lubbock County Justice of the Peace and former reporter who initially covered the case in 1987, believes her killer(s) were residents of Phoenix Apartments.4

My research revealed very little about Veronica’s background. If you have a reputable source of information, please let me know so it can be incorporated into this summary.

Texas Rangers is working to solve the Veronica Ann Taylor case and bring her killer(s) to justice. If you have information about this crime, please contact detectives at (800) 346-3243 or Crime Stoppers at (800) 252-8477. A reward of $6k is offered for information leading to an arrest.5