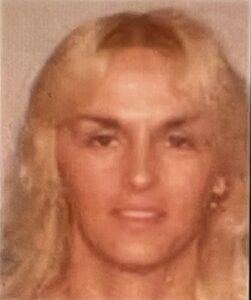 JANET E DEPPIN GENHO, 33, and her husband Robert K Genho, 53, were shot to death 01/08/82 inside their upscale Woodlands townhouse.

The couple lived at 25 Huntsman Horn Circle, on the outskirts of Houston, Texas, less than two years before the home invasion.

Janet, a native of Willard, Ohio, moved to Texas approximately six years ago. At the time of her death she a receptionist with Houston Medical Center.1

The couple are interred at Steuben Cemetery in Steuben, Ohio.2 She was survived by parents Irene and Richard Deppin, sisters Ann and Brenda, and brother Rick.

Montgomery County Sheriff’s Office (MCSO) deputies responded to a silent alarm around 9:50pm on 01/08/82. The front door was found open and a pool of blood was on the patio.

Authorities theorize the couple were watching television when the doorbell rang. Robert answered the door and was shot once in the head and once in the back with a .38-caliber revolver. His body was found in the living room.3

“While being pursued, Janet Genho managed to press the panic alarm button near the master bedroom.”4 She was shot in the face, back and side with a .38-caliber revolver. Her body was found on the second story sunroof.

Montgomery County authorities speculated the killings could have been prompted by debts.5 In 1982, an MCSO spokesman told media robbery had been ruled out as a motive, “the assailants were out after them.”1

Robert was a land developer and an inventor. He invented and patented a self-leveling construction laser device,6 and was a known pioneer in the use of laser in the construction industry.1

He was also scheduled to appear at a hearing 02/18/82 regarding a $1 million judgment won against him by his creditors, that somehow involved the laser patent. He allegedly owed money to entities in Texas, California, Georgia and Illinois.3

Montgomery County Sheriff’s Office is working to solve the Janet E. Deppin Genho case and bring her killer(s) to justice. If you have information about this crime, please call (281) 297-6508.