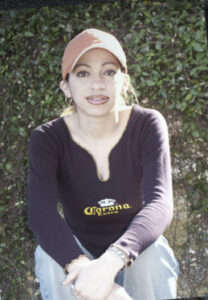 She is survived by her mother, sister Diana Elouad and niece Linda ‘Yesy’ Yesenia Valdez. It is unknown where she is interred.

On 01/20/12 Diana drove their 17-year-old niece to Aspenwood Apartments to spend the day with Rosa. Yesy entered her aunt’s unit, through the unlocked door, and was met with a horrific sight.

She said, “I saw everything was stained, soaked with blood. I wanted to see what had happened because I saw a lot of blood; even the white walls were covered. And then I saw her, face down.”2

The medical examiner found Irasema was stabbed in excess of 100 times, some inflicted after she was already dead. Cause of death was determined to be multiple stab wounds. 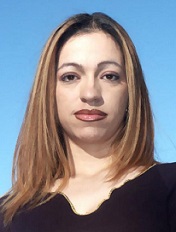 Female Killer. Authorities believe the only item missing from her apartment was a large flat screen television. They surmise the killer knew Rosa had a surveillance camera pointed at her “prized pickup” in the parking lot, and the footage could be watched on the television.

The killer failed to remove the recording device, and authorities were able to recover video of suspect walking up to her second-floor apartment on 01/19/12 at 10:36pm.

The person knocked on the door and, after about a minute, was let in. About 10 minutes later the video abruptly ends, presumably when the recording device is unplugged. Although the individual in the video appears to have a masculine gait, testing of a single drop of fresh blood found on a nightstand belonged to a female assailant. The blood was not that of the girlfriend whom she’d just broken up with that night.2 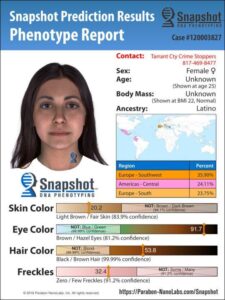 In 2016, Parabon Nanolabs used an analysis of the killer’s DNA to predict what the killer might look like.

Based on their genetic predictions, the killer was a 25-year-old Latino female, with a fair to light brown complexion, brown or hazel eyes, brown or black hair, and few (if any) freckles.

Drug Cartel. Friends told investigators Rosa may have been indirectly involved with her girlfriend selling drugs at a Dallas nightclub. The night before the murder, her girlfriend allegedly claimed she was the niece of Joaquin “El Chapo” Guzman, and knew people that could kill.

When questioned the girlfriend denied this, and investigators could find no evidence to substantiate a link to the cartel2

Arlington Police Department is working to solve the Irasema Rosa Chavez case and bring her killer to justice. If you have information about this crime, please contact detectives at (817) 459-5772 or Tarrant County Crime Stoppers at (817) 469-8477.