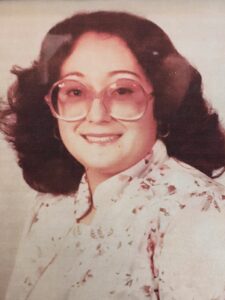 DOROTHY LOUISE ONTIVEROS ESTEP, 32, was found dead 09/30/85 in the trunk of her car along US Highway 84 in McLennan County, Texas.1  According to Texas Rangers, all leads have been exhausted.2

She was a single mother to a 5-year-old daughter, and was a social worker for the State of Texas in Mexia. Conflicting reports say she was employed at Mexia State School or as a Child Protection caseworker, a position she held for three years prior to her death.3

Dorothy is remembered as “…a nice, kind woman…always willing to help…”.4

Dorothy was reported missing by a coworker when she failed to show for work or answer her phone. She was last seen by a neighbor 09/29/85 as she headed to Kenneth Estep’s (her ex-husband) home in Hubbard to pick up their daughter.

On 09/30/85 authorities were advised Dorothy’s abandoned yellow 1981 Plymouth Sapporo was spotted along US Hwy 84, near the Elk cutoff, about 13 miles east of Waco. Around 10:30pm a state trooper discovered her body, and a significant amount of blood, in the trunk. Cause of death determined to be a blow to the back of the head.3

Authorities theorize Dorothy was killed at another location, then placed in the trunk of her car.

My research revealed very little about the background or murder of Dorothy. If you have a reputable source of information for either, please let me know so it can be incorporated into this summary.

Texas Rangers are working to solve the Dorothy Louise Ontiveros Estep case and bring her killer(s) to justice. If you have information about this crime, please contact detectives at (800) 346-3243 or Texas Crime Stoppers at (800) 252-8477.