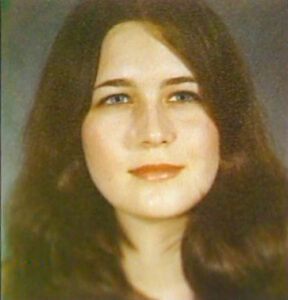 Soon after graduating from Oxford High School in her native Mississippi, Catherine moved to Dallas to pursue a modeling career. A few years later she moved to Fort Worth to be closer to Pat Riley, her boyfriend. Within two years that relationship waned, and she planned to move back to Dallas by Christmas.2

Friends described her as “different,” yet friendly and outgoing. Best friend Martha Kenney has fond memories of their weekends in Dallas trying to break into modeling. They’d go to clubs along Greenville Avenue in hopes of chance meetings with designers and photographers. Dallas friend Billy Martin said, in addition to fashion, Catherine also enjoyed exploring the wide storm drains under the city.3

At the time of her death, Catherine was the bookkeeper at Ridglea Country Club.

On 09/28/84 neighbors recall hearing her loudly arguing with a man, and then the sounds of Catherine’s car speeding from her garage apartment at 3404 1/2 Park Ridge. It’s unclear from reports who drove away in her car – Catherine or the man she was arguing with.4 Jerry Moseley, her landlady, said she had a habit of going to the 7-11 for a late night hot chocolate.5

Minutes later the apartment, located near Texas Christian University, went up in flames. Fire investigators said a cigarette dropped on a mattress ignited the blaze that destroyed the unit.  The arson investigation remains closed. There was no sign of Catherine, and on 09/30/84 she was reported missing by a friend.6

On 10/07/84 her blue 1974 Dodge Dart was found abandoned in the Westcliff Manor Apartments parking lot on South Hills Avenue. Residents said it had been parked there, about a mile from her residence, since 09/30. The keys were in the car, it had a flat tire, and a large pile of clothes stuffed in the backseat. A small amount of blood was found on the outside door handle and on two coathangers inside the car. There were no signs of a struggle inside the car.2 7

Her skeletal remains were found by surveyors 01/23/85 in a south Fort Worth field, just six miles from her home. The exact location was in heavy underbrush, 50 yards west of Santa Fe Railway tracks and 200 yards north of Farm Road 1025, west of Crowley Road. Identification was made through dental records.2

She’s one of five young women believed by some to be victims of a single unknown serial killer:

On 01/11/85, a 30-member task force was formed to investigate the murders of these women, as well as four other slayings and seven rapes.4

Fort Worth Police Department is working to solve the Catherine Davis case and bring her killer(s) to justice.  If you have information about this crime, please call (817) 392-4330.