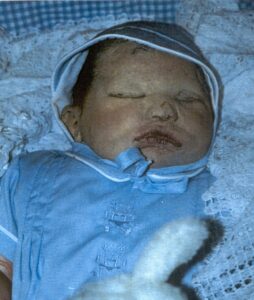 BABY JOHN DOE, 0, was discovered 07/18/1996 in a trash-filled dumpster behind a Clifford Street residence in Odessa, Texas.1

He is interred in Babyland, at Sunset Memorial Gardens in Odessa.

“Advanced technologies and forensic analysis are being used to uncover this mystery, but Investigators want to hear from anyone who may have information on this senseless crime.”1

John was a healthy 7 lbs 11 oz, and was believed to have been between 12-24 hours old. He was almost completely wrapped in a light color cloth towel, when found by a man collecting aluminum cans. It’s believed he was born somewhere other than the alley where he was found.

Investigation revealed this precious boy had been murdered, after suffering horrible abuse.2 His official cause of death was multiple skulls fractures, indicating he’d been hit on the head more than once.3

Several physicians advised that the mother was likely suffering internal hemorrhaging, and could bleed to death if she didn’t receive medical treatment soon. This led authorities to surmise she was a scared young woman.

My research revealed very little about him or this horrific crime against one so innocent. If you have a reputable source of information, please let me know so it can be incorporated into this summary.

Texas Rangers and Odessa Police Department are working to solve the Baby John Doe case and bring his killer(s) to justice. If you have information about this crime, please contact detectives at (800) 346-3243 or Texas Crime Stoppers at (800) 252-8477.