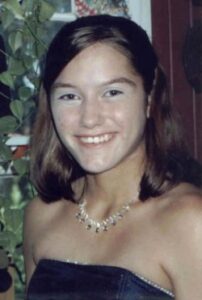 “A Rapides Parish jury has found David Anthony Burns, 46 of Boyce, guilty of second-degree murder for the October 2004 death of Courtney Coco, 19 of Alexandria.

The jury deliberated for about an hour and a half before reaching its unanimous “guilty” verdict.”1 Sentencing set for 11/28/22.
—- 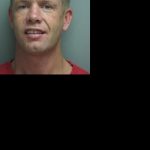 On 10/04/04 the body of Courtney Megan Coco, 19, was discovered in an abandoned building in Winnie, Texas.  She was last seen by her mother, Stephanie Belgard, on 10/02/04 at her West Sandy Bayou residence in Alexandria, Louisiana.2

Courtney was a 2003 graduate of Alexandria Senior High School where she was a JV cheerleader and as a senior worked in the school office. Joe Moreau, Principal, described her as “…quiet, shy and polite. She was a real sweet little girl.”3

A best friend remembers her as “…sweet, kind, loving, honest, caring…and would have given you the shirt off her back if you needed it. She always stood up for what was right and always willing to help someone in need.”4 Another  remembered her as “always  cheerful and smiling…genuine and she loved others.”5

She is interred at Alexandria Memorial Gardens in Woodworth.6

On 10/04/04, a construction worker driving a backhoe past an unfinished building in Winnie, Texas, glimpsed Courtney’s partially nude body within. Investigators suspect she had been dead three to five days. Her autopsy came back negative for a cause of death, no trauma to the body was noted, and toxicology report was negative for narcotics.3 According to Chambers County Sheriff’s Office, the medical examiner ruled her death a homicide. Alexandria and Texas authorities are working closely on the case as it has not yet been determined where she was killed.7

Courtney’s Pontiac Bonneville was found 10/12/04 outside a Houston apartment complex. Arrested for being in possession of the stolen vehicle were Texas residents Cheatak Thomas, 24, and Joseph Lawrence, 21, neither of whom are considered suspects in her disappearance and murder.8

Fifteen years later, Courtney’s family reached out to Woody Overton, retired Louisiana State Police investigator and host of the Real Life-Real Crime podcast.  On 09/06/19 he and Jim Rahman, former Livingston Parish Deputy Sheriff, released the first of an 18-episode investigative podcast “Who Murdered Courtney Coco?” Their efforts reached fruition when new information they’d hoped would lead to an arrest was uncovered. Their findings were turned over to the Coco family and authorities soon after.

Family and friends held a peaceful protest 01/31/20 in front of the Rapides Parish Courthouse. Courtney’s mother told KALB that in November 2019 Phillip Terrell, Rapides Parish District Attorney, admitted he knew who the killer was and  an arrest would be made within two weeks. 9 As of this writing, no arrests have been made.

“An arrest has not been made for the killing of Courtney. We have full confidence in the investigative work presently being performed by both the RPSO and APD. If and when these law enforcement agencies gather evidence that they believe proves beyond a reasonable doubt that a specific person murdered Courtney, then we are fully confident they will seek an arrest warrant.” 9