JOHN MICHAEL ‘MIKE’ BAHAM, JR was last seen around 7:30pm 12/23/90 in Oakdale, Louisiana. Investigators and family believe whatever his fate, it occurred between 7:30pm-9:00pm that night.1 He was 21-years-old at the time of his disappearance.

Mike is a 1987 graduate of Oakdale High School and was working in Texas at the time of his disappearance. He’d only recently returned to Oakdale to spend Christmas holidays with his family. 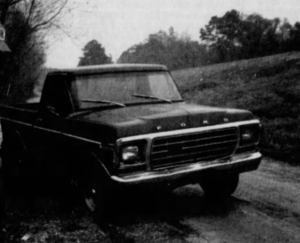 John Mike spent the early evening of 12/23/90 riding around with his buddies, drinking and briefly met up with his younger brother Tommy at the Bayou Store in Oakdale. From there he was headed to meet a friend at a car wash just minutes away, but never arrived.2

On 12/24/90, friends found his abandoned truck under the Calcasieu River bridge off US Highway 10. The keys were still in the ignition, driver’s door open, and battery dead (some sources say truck was still running).

The friends contacted Mike’s father who took the truck home believing he’d return later that day. By the next morning he still hadn’t shown up, and his father reported him missing at 5 am 12/25/90. Authorities began a search of the area where his truck was discovered 12/26/90 using divers, horseback riders, and helicopters.3

During the course of the investigation, several suspects were questioned and given polygraph exams, which all passed.4

Former Oakdale resident Paul A. Kilgore was arrested 07/07/98 in Michigan and charged with first degree murder and first degree robbery in connection with John Michael Baham Jr’s disappearance eight years earlier.6 The arrest was based largely on statements made by inmate Joshua Sittingdown, who claimed to be a witness to the crime – when he was 13 years old. He reportedly lead police to the Dead Man’s Lake area, where the body was buried. Authorities excavated the site, but found no evidence to support his claim.

Kilgore was extradited to Louisiana 07/15/98 and promptly retained the services of well-known criminal defense attorney David Stone. A grand jury was convened and found insufficient evidence to indict in John Mike’s disappearance, so Kilgore was released. Sheriff Turner expressed his disappointment in their findings, and in District Attorney Doug Hebert, who he believes took the case before the Grand Jury before it was thoroughly investigated.7

Allen Parish Sheriff’s Office is working to locate John Michael Baham, Jr. and bring the person(s) responsible to justice.  If you have information about his disappearance or current whereabouts, please call (337) 639-4353.