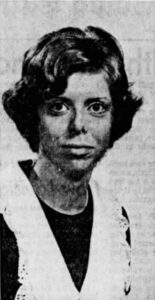 DEBRA ANN KELLEY WOODSON was last seen 03/01/86 in Pineville, Louisiana.1  One of the initial investigators claimed Debra was on a talk show and admitted to walking away from her husband and children. Her family disagrees and fear foul play is involved.

At the time of her disappearance, the 31-year-old was a US Postal Service employee and lived with her sons at 1805 Sunburst Lane in the Pine Highlands apartment complex. On 03/25/85 she filed for a separation from her husband of 10 years2; less than a year later she disappeared.

Debra married Donald Lee Woodson 10/12/743 4 and they had two children, Donnie Lee5 and David Aaron.6 Prior to the separation, the family lived at 233 Woodson Landing Road in Deville.7

Debra was last seen getting into a male friend’s truck between 3:30-4:00pm 03/01/86. Not long after, the friend became sick and drove her back to the apartment complex, leaving her by the mailboxes.8 However, other sources report she was last seen in the Deville area.

In response to a missing persons report filed by her estranged husband, Pineville Police arrived at her residence at 7:35pm 03/04/86. They noticed her beige, two-door Mercury Lynx was parked in the lot near the complex. Inside the apartment were two cups of coffee (some reports say glasses of tea) and a bathtub full of used water. 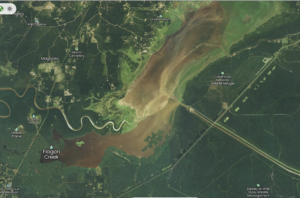 The two psychics hired to locate Debra were unsuccessful, as was the excavation of a suspect’s garden.8

David Gallent, one of Debra’s uncles, conducted his own search. Through media outlets, he asked outdoorsmen to be on the lookout for his niece’s blue post office windbreaker. He believed a set of keys were in one of the pockets, and they might help with his probe.10

One of the investigators who initially worked the case does not believe Debra is missing. In 1999 he told media “I think it was her,” referring to a guest on Oprah’s 10/03/86 Runaway Moms show. “Mary” told Oprah that two years prior she simply got on an airplane and left her husband and two children behind. Beverly Kelley Harrell, Debra’s mother, said she did not see the entire show when it aired, and offered to pay for a copy, but investigators told her they never obtained it.

Leon Woodson, Debra’s brother-in-law and a former law enforcement officer, said he viewed a portion of the show and the likeness wasn’t enough to convince him it was her. The same 1999 article quoted investigators as saying no video exists in their evidence file, and an Assistant District Attorney saying the existence of such a video was news to him.8

Donald L. Woodson, Debra’s husband, petitioned the Court to declare Debra dead.11 According to the Assistant District Attorney that represented the State, her SSN had not been used and no evidence was found to suggest she was still alive.8

The original hearing was scheduled for 12/06/99; however, the petition was amended from Seeking a Declaration of Death to Seeking a Judgement of Presumptive Death on 04/07/00 due to law enforcement involvement and Petitioner’s inability to produce the requisite clear and convincing evidence. Judgement of Presumptive Death was signed by 05/01/00, declaring her date of death as 03/01/99, exactly five years after she disappeared.12

If there is anyone in the woods or anywhere who finds anything unusual, please please keep in touch with the police… her children miss her and talk about her although they don’t fully comprehend yet what may have happened… she’s still with us in our hearts and in our minds. We feel God is taking care of her. I hope He has been merciful and is watching over her.”13

Her family believes foul play was involved and are desperately seeking answers. At their request, her disappearance has been added to my ongoing inquiries list.

Pineville Police Department and Rapides Parish Sheriff’s Office are working to locate Debra Ann Woodson and bring the person(s) responsible to justice. If you have information about her disappearance or current whereabouts, please call (318) 442-6603 or (318) 442-6603.