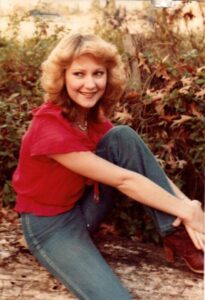 BAMBI LUANN BRANTLEY was last seen the night of 10/22/86 at Leebo’s convenience store in Leesville, Louisiana.1 The 25-year-old was reported missing 10/23/86 by brother Roddy Brantley.

Bambi was a sheltered girl who’d always lived with her parents in Memphis, Tennessee2 – until her recent move to Leesville. Wanting a fresh start after a bad breakup, she was soon living with 38-year-old Roddy at Tower Trailer Park on Highway 8 West.3 While in Leesville she was outgoing, and had numerous friends she frequented social clubs with.4

At the time of her disappearance, she was a salesperson at Pynes Chrysler Auto Dealership.

The night of 10/22/86, Bambi purchased a fountain drink and used the payphone outside of Leebo’s to call her brother Roddy, who was at Pit Grill. Leebo’s is located at the entrance to the West Louisiana Forestry Festival Fair Grounds, a well-traveled highway leading to Texas.

She didn’t speak with Roddy directly, but left a message asking he pick her up so she could use his car to visit her boyfriend. Within 30 minutes he arrived home, noticed the fountain drink sitting on the floor, but didn’t see Bambi. With no reason to be concerned, he left his car and keys, then rode back to Pit Grill with a friend.

When Roddy returned home early the next morning, his car was in the driveway and the fountain drink in the same place, but Bambi was still nowhere to be found. He immediately became concerned and reported her missing to Leesville Police Department the morning of 10/23/86.

SIMILARITIES TO OTHER CASES

“Bambi was one of five women, all white, all about the same age, all with blond hair, and all of whom disappeared in Leesville between 1980-1990.” The other four victims were found deceased, and four of the five women disappeared from a convenience store.4

The case was eventually turned over to Vernon Parish Sheriff’s Office (it’s unclear if transferred soon after her disappearance or after becoming a cold case). Unfortunately, the investigation has slowed – the Sheriff’s Office has yet to receive the files and evidence requested from Leesville Police Department.2 On 06/18/19 media requested copies of same, but were advised none existed due to lack of storage space.5

At the time of the initial investigation, rumors circulated that her body had been discovered. “These rumors were all fictitious. Bambi Brantley has not been heard from…and law enforcement has never located any human remains suspected to be those of Bambi.”4

Bambi’s mother is 93 years old as of this writing, and is desperate for information about her missing daughter. Roddy passed away in 2008, never knowing the fate of his sister.5 He never stopped looking for Bambi, and distributed her picture and posters as he traveled for his job.6

The family begged anyone with information – regardless how insignificant it may seem – to please come forward and share with investigators.

Although her family hopes she will be found alive, beside where her father is interred there is “…a permanent marker to remind our descendants…Bambi lived and brought joy and laughter into the lives of those who love and miss her.”7

Vernon Parish Sheriff’s Office is working to locate Bambi Luann Brantley and bring the person(s) responsible to justice. If you have information about her disappearance or current whereabouts, or if you resided in Tower Trailer Park in 1986, please call detectives at (337) 238-7248.