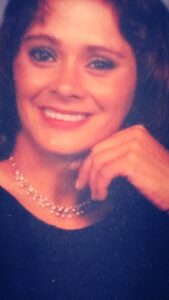 Vickie Lynn Badeaux Orgeron Toups, 38, was last seen 10/11/03 at around 2am walking down US Highway 90 in Boutte, Louisiana. Several hours later her body was discovered in Des Allemands by a passing motorist.1

The mother of four is lovingly described by her daughter as “such a happy person.” Her children are desperately seeking answers and created the Justice for Vickie Badeaux Toups page in her memory.

She is survived by husband Roddy Toups; children Seth and Brittany Orgeron, and Kajun and Hali Toups; and siblings Barry, Eric and Raenell.2 She is interred at Holy Savior Church Cemetery.

Vickie’s body was found at approximately 7am by a passing motorist. She was partially clothed in a water-filled ditch “…along LA Highway 635, a quarter-mile road connecting US Highway 90 and Old Spanish Trail, between Paradis and Des Allemands,”3 little more than a mile from her last known address of 171 Autin Lane in Gheens.4

Vickie struggled with drug addiction and was often seen hitchhiking around the West Bank, two factors authorities believe increased her vulnerability to victimization.

An autopsy performed by Jefferson Parish Coroner’s Office determined she was beaten to death. “She had skull fractures, a broken neck, facial fractures and bruising on her body…her abdomen, chest and ribs.” Investigators are unsure if an object or fists were used, or if more than one assailant was involved. They believe she was killed elsewhere, then moved to the location where she was found. 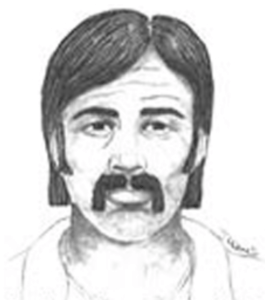 According to witnesses, the “person of interest” (left) was searching for Vickie in the Boutte area around 1am – just  hours prior to the discovery of her body.

He’s described as a dark complexed white male, with dark brownish-gray hair, mustache, and weighed between 180-195 pounds. He was driving a white midsize late-model vehicle, similar to a Nissan Altima.3

Major Rodney Madere, of St. Charles Parish Sheriff’s Office, said a number of individuals were interrogated over the years and “almost every single one of them was given a lie detector test.”5

A reward of up to $2,500 is offered by Crime Stoppers GNO for information leading to the arrest of the person responsible for Vikie’s murder.6

St. Charles Parish Sheriff’s Office is working to solve the Vickie Lynn Badeaux Orgeron Toups case and bring her killer(s) to justice. If you have information about this crime, please call (985) 783-1135.