Tammy Michelle Call, 15, was reported missing 02/20/90 from Leesville, Louisiana by parents Lt. Col. Joe & Reba Call. Seven years later, in January 1997, her remains were discovered.  Cause of death could not be determined, and no physical evidence was found.1

She was born in North Wilkesboro, North Carolina. Her family was stationed at Ft. Polk in Leesville, Louisiana, where her parents still reside. She is also survived by a brother, two sisters, and maternal and paternal grandmothers. She is interred at Pine Hill Cemetery in Leesville.2

The morning of 02/20/90 Tammy rode the bus with her siblings to Leesville High School. Once there, she and a girlfriend decided to skip school; however, they were stopped in the parking lot by a teacher and instructed to return inside. 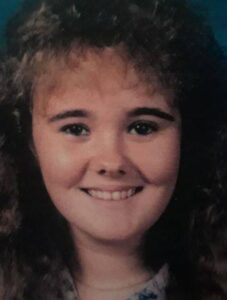 Tammy complied, but the friend continued to her boyfriend’s car. While the teacher was distracted with her friend, it’s believed Tammy snuck out the school’s back entrance.  Both the friend and the friend’s boyfriend denied seeing her after they left the school parking lot.3

A month after her disappearance, a student found her backpack on the walking trail leading to Belview Road. Investigators believe she was either kidnapped or willingly left with someone. Continued efforts to locate her were unsuccessful, and the missing person case soon went cold.4

In January 1997 (some reports February 1997), a hunter discovered a fragment of human skull on West Boundary Road near Highway 10. Larry Smith, the investigating officer, for unknown reasons took Tammy’s father to the area as detectives combed for more remains.5

LSU’s Anthropology Department (FACES) later determined the bones had been ‘out in the open’ seven to eight years, and DNA tests confirmed a match between them and samples taken from her parents.4

It’s unclear if the crime occurred in this location, or if her remains were later moved by the killer(s).

West Boundary Road is in close proximity to areas used by Ft. Polk Army Post for training exercises. It’s also the military post where convicted killer Samuel Galbraith was stationed from 12/87-06/90. Within the two years prior to Tammy’s disappearance, two other women were murdered under similar circumstances.

Galbraith has reportedly refused to speak to authorities about his possible involvement in Tammy or Pamela’s murders. He’s currently serving 71 years at hard labor for Karen’s murder.  Some sources indicate Vernon Parish Sheriff’s Office considers Galbraith a person of interest6, while others deny a connection between the cases.7

Galbraith was granted parole in 2017, and it was rescinded due to a technicality two days prior to his scheduled release.8 As of 03/12/19, his hearing for the Complaint of Declaratory and Injunctive Relief motion was postponed indefinitely.6 He remains incarcerated as of this writing.

Vernon Parish Sheriff’s Office is working to solve the Tammy Michelle Call case and bring her killer(s) to justice.  If you have information about this crime, please call (337) 238-1311.