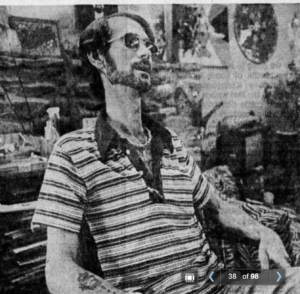 Michael Dennis Siau, 38, was a U.S. Army Veteran who served during the Vietnam War. His badly beaten body was found 09/26/85 in Alexandria, Louisiana.1

Michael owned Wizard’s, a hippy-inspired oddity store in Boyce, that sold plants and cassette tapes. He’s a self-described GI brat, a Capitalist, the world’s foremost authority on Stonehenge (although he’d never been due to “political reasons”), a doctoral student at LSU (until they refused to publish his book), and an expert in “magic and superstition – white magic that is.”2

Michael had a disabling disease that affected his arms, shoulders and back. He could not lift his left arm higher than chest level, and often experienced crippling pain.3

He was born in Vallejo, California; at the time of his death he lived at 603 Magellan Pass near Cotile Lake in Boyce. He is survived by parents George and Dolly Siau and brothers William “Bill” Clinton Siau and Mark Clifford Siau. He’s interred at Alexandria National Cemetary.4

A jogger discovered the partially nude body of Michael around 7:45 am lying in a ditch along Plantation Drive, near Hot Wells Road.5 Autopsy determined cause of death to be a broken neck and severe beating.6

According to authorities, Michael was last seen alive near the intersection of England Drive and McArthur Drive at around 2:00 am. His truck broke down at Rapides Avenue and McArthur Drive, and he attempted to find friends to help him get it started. They believe the below jewelry was stolen during the crime:7

Michael Dennis had firm beliefs he frequently shared in “letters to the editor.” Just two months prior to his death, his ‘Do-Gooder Laws’ letter was published. His contempt of the “small group of elite humanitarians that try to dictate policy to the majority in the name of Big-brothers megalomania” was obvious. As was his “most serious concern” with “just who controls the information of voluntary acts of subjugation.”8

Rapides Parish Sheriff’s Office is working to close the Michael Dennis Siau case and bring his killer(s) to justice. If you have information about this crime, please contact: