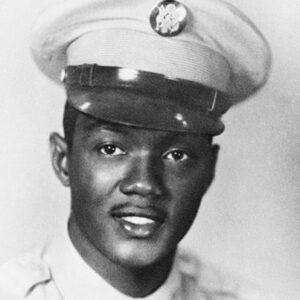 Deputy Sheriff Oneal Moore, 34, was killed 06/02/65 during an ambush while on patrol with Deputy David ‘Creed’ Rogers in Varnado, Louisiana. They were the first two black deputy sheriff’s with the Washington Parish Sheriff’s Office, and were hired 06/01/64.

Oneal, a US Army Veteran, distinguished himself as a leader in New Zion Missionary Baptist Church, his local Mason fraternal lodge and the PTA. He knew by accepting the job he put himself and family at risk, and he tried to be cautious. While others marched and picketed, he avoided civil rights activities, wanting only to perform law enforcement duties.1

Oneal’s wife Maevella lovingly remembers the care he’d take to be quiet when he got off his shift at 2am — so he’d not wake their daughters, then 9, 7, 4, and 9 months. The next day, the children “would run and jump on him, calling out, ‘Daddy!'2 She also remembers it was a frightening time and there was a lot of pressure “…but my husband was not afraid of anything. He wasn’t a scaredy-cat.”

Oneal was buried a week after the shooting, the church so full of mourners all could not fit inside. In Bogalusa that evening James Farmer, activist and National Director of the Congress of Racial Equality, proclaimed at a rally that the shooting was “the Klan’s bloody answer” to a local voters’ league request that more blacks be hired as law enforcement officers. In the weeks leading prior to the shooting, rallies and marches were held demanding public facilities be desegregated. State troopers were brought in to quell any disturbances and try to keep the demonstrators safe. By the time Oneal and Creed were shot that night, about 50 whites had been rounded up for attacking or harassing blacks.3

Oneal was survived by his wife and four daughters.4 He’s interred at Moses Cemetery. Sources say The Deacons for Defense and Justice protected and supported the Oneal Moore family in the years that followed. The Deacons, founded in 1964, were a group of organized World War II black veterans who believed in armed self-defense to protect civil rights activists. There were about 20 chapters throughout Louisiana, Mississippi and Alabama.5

Creed continued working as a deputy in Washington Parish until his death in 2007 at the age of 84.

The pair had just crossed the railroad tracks on Main Street, headed to Oneal’s home where Maevella had their catfish supper ready; however, they were diverted at the last minute by a report of a brush fire. Moments later a dark-colored 1954 Chevrolet pick up truck pulled up alongside their unit, and an individual in the truck’s bed opened fire, killing Oneal instantly with a shot to the back of the head.

The unit crashed against a tree, and Oneal’s body slumped over his partner.Creed was shot in the shoulder and lost an eye, but managed to radio a description of the truck – with a confederate flag on its front bumper – to officers in the vicinity. The shooting generated nationwide attention, and FBI agents and Louisiana State Police opened investigations. The FBI continued their investigation for two years, until all viable leads had been exhausted.

Daniel “Scrap” Fornea, a World War II Army Veteran, was the first person to arrive on the scene, and was interviewed by the FBI eight times. He stated he saw a dark-colored early 1950s pickup truck following a patrol car and heard 8-10 shots. He ran to the site, but the truck had disappeared. He saw the patrol car crashed into a tree, went to the driver’s side of the car and saw Oneal dead. He then went to the other side of the car and saw Rogers, who gave Fornea his shotgun in case the shooters returned.

Fornea took the weapon, and hid behind the tree until others arrived. He remarked that although “…all the other persons showed up wearing night clothes or outer clothing covering them, two individuals arrived fully dressed. XXXXXXX [redacted by DOJ] and Bobby Lang, both of whom were considered suspects throughout the investigation.”6 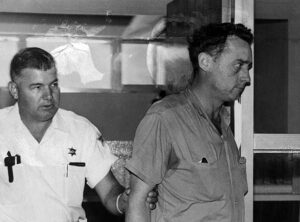 Approximately an hour later police in Tylertown, Mississippi stopped a vehicle driven by Ernest Raphael ‘Ray’ McElveen, a papermill worker from Bogalusa, Louisiana. He was also a member of the White Citizens Council, the National States Rights Party and an honorary member of the Louisiana State Police. Pistols were found in the vehicle, but no shotguns or rifles.

McElveen, the prime suspect and a known white supremacist, was arrested 06/03/65 in Mississippi for the murder of Oneal. Within days the 41-year-old’s $25k bail was paid and an airtight alibi supplied. The state ultimately dropped those charges due to insufficient evidence. He died in 02/17/03 at the age of 79.

The FBI investigated the individuals who contributed to McElveen’s bail, including the main contributor, Saxon Farmer, who provided over $10,000. “Farmer was head of the Klan Bureau of Investigation for Washington Parish and the leader of the reported-five Klan units in the parish. In 1965, Farmer refused to provide a voluntary statement to the FBI, and continued to refuse until 1990 when he was subpoenaed to the grand jury XXXXXXXXXX.” [redacted by DOJ]

The FBI reopened their investigation in 1990, 2001, and again in 2009 under the Civil Rights-era Cold Case Initiative. No new charges were filed against McElveen nor the other two suspects authorities believe was involved in the shooting. Their efforts “failed to yield any charges or even to narrow the field of suspects. Witnesses and most subjects have passed away, leaving behind second and third generation witnesses who have only rumors, speculation and hearsay to share with the FBI.”6

Alan Ouimet, retired FBI Agent, was temporarily assigned to Bogalusa in the Civil Rights Era. He remembers an “umbrella of violence that caused fear on both sides.” It wasn’t unusual to knock on the door of a black person or a white person and see fear on their faces… and a car with two Klansmen in it watching our movements.”‘2

The FBI coordinated with Unsolved Mysteries for 12-17 hours each day for a week to accurately reenact the crime scene; the case aired November 1990. The FBI offered a $25,000 reward to anyone who substantially assisted in an indictment or conviction. Approximately 35 calls were received; however, none led to any major developments.6

Randy Seal, current Sheriff of Washington Parish, formally honored Oneal with the dedication of the Fallen Heroes Memorial in Franklinton. The memorial is structured around a bronze bust of Deputy Moore, and surrounded by plaques of other Washington Parish fallen officers.7

According to Robert Crowe, former Washington Parish Sheriff, “The KKK killed that officer, that’s definite.” Crowe is the son of Sheriff Dorman Crowe, the man who hired Oneal and Rogers as the department’s first black deputies.2

Although most of the suspects and witnesses are deceased, authorities believe “someone out there still knows something” and hopes the fear of retaliation is no longer as strong and they will come forward to bring closure to the family.

Washington Parish Sheriff’s Office is working to solve the Deputy Oneal Moore case and bring his killer(s) to justice. If you have information about this hate crime, please call (985) 732-6238.