Danny Rae Holt, 38, was found dead in his Leesville, Louisiana home on 11/23/13 from an alleged suicide. It was later determined the father of three had been fatally shot in back of the head.1 2

He was a social person and enjoyed playing music.3

Amanda Irey, Danny’s girlfriend, called 911 at approximately 10am “frantically screaming and pleading for help.” She later told investigators she and Danny were arguing alone in the home when he suddenly picked up his Winchester 9422 .22 caliber rifle and shot himself under the chin.1

Irey’s clothing was sent to a forensics team, and a blood splatter expert examined the scene. Forensic analysis did not support her assertions, and concluded:5

Authorities believe Irey knows the perpetrator’s identity, but has refused to cooperate further in the investigation of this crime against Danny. She did not have gun powder residue on her hands.6 2

Irey was later arrested by Vernon Parish Sheriff’s Office on a charge of second-degree murder in the death of Danny Holt; however, the Grand Jury failed to indict, and she was released.1

As of this writing, the case remains unsolved. 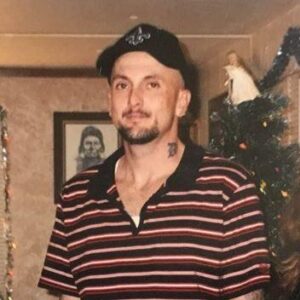 Mary Holt, 83, continued “to stay in contact with detectives, making sure to call the office regularly in hopes of there being any sort of update in the death of her son. Throughout the years, her dedication was unwavering. She deserved closure and we are determined to provide that…”~ Detective Jordan.5 Sadly, Ms. Mary passed away 06/12/20.

Vernon Parish Sheriff’s Office is working to solve the Danny Rae Holt case and bring his killer(s) to justice.  If you have information about this crime, please call Detective Rhonda Jordan at (337) 238-1311.