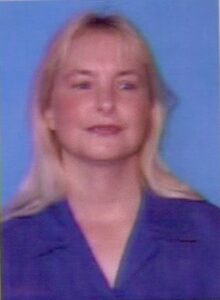 Connie Jo Brittingham Skaggs McKenzie, 48, was murdered 11/04/00 at the Taco Bell she managed on Barksdale Boulevard in Bossier City, Louisiana.

The family lived on Cyprus Lake Circle in Benton, where they’d moved to open a small business. Unfortunately, the business failed and she returned to the workforce just nine weeks prior to her death.

Connie was active member of Stockwell Road Missionary Baptist Church, a youth sponsor and mentor. She was also an experienced leader, having worked in management at several fast food restaurants.1

David McKenzie remembers his wife as a “very caring person and devoted mother…very trusting and very helpful… She would have done anything for anyone.” The couple were married 15 years and had two children together. Connie also had two older children from a previous marriage.

She is survived by husband David; sons Matthew and Cody McKenzie, and Shawn Skaggs; and siblings Pete, Angie and Janet Brittingham. She was preceded in death by son Brian Skaggs. She’s interred at Jones Cemetery in her hometown of Midland, Kentucky.2

When Connie didn’t return home between 3:30am-4am as expected, David drove to the restaurant to check on her. He found her car still in Plantation Plaza’s parking lot and called the police at 7:19am.3

Bossier City Police Department (BCPD) responded within minutes and found no evidence of forced entry. However, an observant officer noticed  what appeared to be blood spots on the floor, so they broke the glass and entered the establishment. Her body was soon discovered inside the walk-in cooler.4 Official cause of death has not been released; however, several sources say she was stabbed multiple times and her throat was slashed. It was obvious a struggle occured, and forensic evidence was collected and sent to the local and FBI crime labs for analysis.

Stephanie Jackson, a manager at Subway two doors down, was approached by David early Saturday morning. He explained his wife was Connie, that when he spoke with her several hours earlier she wasn’t feeling well and planned to be home by 3:30am-4am.5

Taco Bell’s inside-dining closed at 12am on the weekends, and the drive-thru closed at 2am. As the investigation progressed, it was determined Connie was in the store alone when she activated the alarm at 2am. Some speculate she allowed the two employees, scheduled to work the shift with her, to leave at 12 as a kindness by a new manager. Whatever the reason, at 2:01am the alarm was manually deactivated. It’s believed she was killed sometime between 2am and 7am 11/04/00.1 6

According to Sgt. Darren Barclay, BCPD Commander of the Violent Crimes Unit, a number of suspects were cleared over the years – with the exception of her husband, who he considers a ‘person of interest.’ David told investigators he and their children, ages 15 and 13 at the time, were asleep in their home 30-40 minutes away when Connie was killed. Barclay feels that not an airtight alibi as there’s no way to verify, and “Some of his [David’s] statements were peculiar… they were having financial difficulties.”4

Bossier City Police Department is working to solve the Connie Jo Brittingham Skaggs McKenzie case and bring her killer(s) to justice. A reward of $1,000 is offered.8 If you have information about this crime, please call (318) 741-8605.