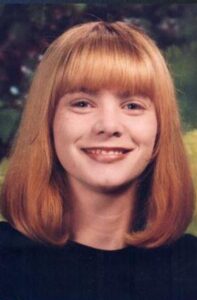 Alicia ‘Allie’ Rose Jeane Carver, 19, and Barbara Ivey, 14, were brutally attacked 09/11/02 at their home in New Llano, Louisiana. Alicia was pronounced dead at the scene.

Allie, 19, was born in Pineville and lived in Vernon Parish most of her life. She is survived by husband Mark Carver, sister Kristal Cryer, and father Richard Jeane. She’s interred at Mitchell Cemetery near her mother, Angela Cryer, who predeceased her.1 According to her husband, her surname is listed incorrectly as Cryer on the headstone. She was never a Cryer; her maiden name was Jeane.2

At the time of her death, Alicia was was living with Barbara and her family at 208 Lake Street in New Llano.3 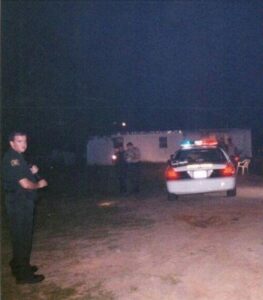 New Llano Police Department was called to the scene at approximately 11:31pm, in response to a call by Barbara’s mother, who found both Alicia and Barbara severely beaten in a bedroom. She screamed for her boyfriend who was asleep in a separate room, and didn’t wake up during the commission of the crime. He was cooperative with the investigation, and soon ruled out as a suspect.4

Alicia suffered “horrific injuries to her face and skull,” and was pronounced dead at the scene. Cause of death was ruled as blunt force injuries to the head. Barbara also had acute traumatic head injuries, but made a full recovery.5

Detectives immediately began interviewing witnesses and associates of the two victims,6 and briefly placed Barbara in protective custody during her hospital stay and after discharge while they hunted the killer.7 Unfortunately, Barbara was unable to recall the incident or attacker’s identity.8

The scene was later described by responders as “one of the most brutal ever witnessed by many law enforcement officers in Vernon Parish.”9

My research revealed very little about the crime or Alicia’s background. If you have a reputable source of information, please let me know so it can be incorporated into this summary.

Vernon Parish Sheriff’s Office is working to solve the Alicia ‘Allie’ Rose Jeane Carver case and bring her killer(s) to justice. If you have information about this crime, please call (337) 238-1311.